Festival of Colours Holi: India is the land of festivals. Many festivals are celebrated here. Holi is one of them. It is celebrated in March while the arrival of the spring after the full moon. The festival begins from ‘falgun Purnima’ and is known as till ‘teras’.

Holi is celebrated not only in India but also in many countries like North America, New Zealand, Australia, and many more countries. They enjoy and love celebrating Holi. They dance when the music starts.

Holi is the colour festival or festival of colours. It is also known as ‘Dhulandi’. People wait for this festival from many days. They enjoy celebrating Holi as it is associated with different colours. 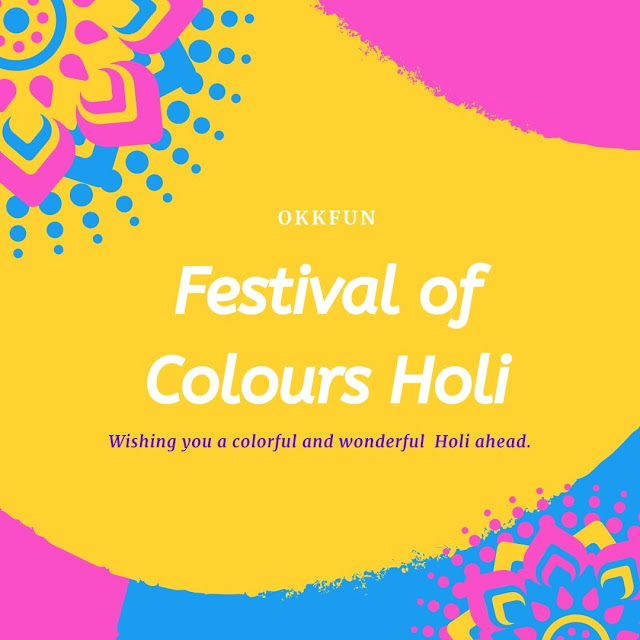 There are many colours in Holi. Pink, blue, green, purple, yellow, red, orange, and many other colours.

Holi is basically a two days festival but in some part, it is celebrated for many days. The first day is celebrated as ‘Holika Dahan’ in which woods are burnt in between the roads. This is from the Hindu mythology burning woods. The other is the day of Holi in which people play Holi.
Holi is celebrated in the victory of good over evil. The 16-day Brij-Holi is popular till today. Lathmaar Holi of Barsana, Uttar Pradesh is most attracted nowadays in which women beat men with wooden sticks.

There are various Hindu mythologies associated with this festival. Holi is celebrated in different ways all over India. There are many stories in history regarding the celebration of Holi.
The first story is associated with King Hiranakashyapa who only wants his kingdom to treat him as God. But his son, Prahlad, was the devotee of Lord Vishnu.
The king has warned his son many times not to worship Lord Vishnu and should treat him as God but his son never accepted this. He continued worshipping Lord Vishnu. Then the king decided to burn his son.
He asked his sister Holika who had the boon that she will not get burnt. So the King told her to sit on fire and should take Prahlad in her lap. After sitting on fire, Prahlad was safe and Holika was burnt and dies. From this story, ‘Holika Dahan’  and Holi is celebrated on victory over evil.
The second story is associated with Rasleela of Lord Krishna and the gopis. Lord Krishna does prank on the gopis which was popularized in Brij. The celebration of Holi is popularized till today and is called as ‘Brij ki Holi’ which is celebrated for 16 days.

People make Gujiya, the famous dish of Holi. Nowadays, there are many readymade dishes available in the market but people love making it at home. Malpuas, Bhaang ki pakori, thandai, gol gappe or panipuri, Dal kachori, papri chaat, and Dahi Bhalla are some dishes made especially on this day and are much popular.

The celebration of Holi is commenced with many days before. All dishes are made in advance. People start preparing for food items. People buy Holi colours from the market. Kids are much more excited about this festival. They buy water balloons, pichkaris which are water guns, for Holi and plays with them before Holi.

On the Day of Holi:

On the special day of Holi, kids wake up earlier than their parents in the morning. They fill their water balloons and a bucket full of water and add colours to it for their pichkaris, the water guns. On the other hand, adults wear dark colour clothes or old clothes.
As if colours of Holi doesn’t go away from clothes then no problem. Women make dishes for Holi like fryings, chaat, Papri chaat, Dahi bhalla, kanji, thandai and so on. Then they arrange in different dishes or utensil so that they can serve when someone comes to their home for celebration of Holi. Thandai and kanji are the drinks which help in refreshing.
People keep their phone safe so that water doesn’t go to their phone.
Group of people roams in the society to each house and wishing each other. Then they put holi colours on each other and saying ‘BURA NA MAANO HOLI HAI’ which means ‘don’t feel bad if someone puts colour on you’ and then hug each other. Then dishes are served to them.
They enjoy playing Holi and dance as well on music mainly Holi songs. Lots of photos are clicked. Then they join the group and visit house of other members of the society. They enjoy full day.
After celebrating Holi, they go back to their home and bath and feel relaxed. They get tired at the end of the day but remember the day and celebration. They watch photos and videos clicked on Holi and share them on their social media account and make the day memorable and remember the day forever.